In 2019 we saw unprecedented levels of EEE in the MetroWest area. 12 CMMCP member communities were designated as “Critical” risk, and an additional 11 were designated as “High” risk for EEE. Several control measures were implemented by CMMCP, the Mass. Department of Public Health and the State Reclamation and Mosquito Control Board in 2019 for risk-reduction including larval control, public education, and both truck-mounted and aerial adulticiding.

In an effort to reduce risk in 2020 from 2 species of mosquito that are implicated in the EEE transmission cycle in either birds or humans, CMMCP will perform enhanced larval control operations in the communities designated as “Critical” and/or “High” risk in 2019[1].

Mosquito control districts, along with public health and other state officials, began to meet in late 2019 to determine areas of possible risk reduction from EEE in 2020. It was determined that a focus on 2 mosquito species in the larval stage may show risk reduction from EEE. Beginning in February 2020, wetland areas that are potential habitat for these 2 vector-borne disease species have been located on aerial maps, entered into our GIS system and ground-truthed by CMMCP staff to determine suitability in this program. To date over 2,500 acres are targeted in this program in 21 communities by both aerial (helicopter) and ground (hand/backpack) treatments. Wetlands greater than 5 acres will be targeted by helicopter after ground-truthing confirms it is potential habitat for either of these 2 species, and wetlands smaller than 5 acres will be targeted by ground crews starting in a one mile radius around confirmed EEE isolations in 2019 (human, horse & mosquito).

Larval control products used by CMMCP are mainly bacterial-based. 2 of these products used at CMMCP for several years now are certified organic, and have good human-health safety profiles[2]. The product of choice in most instances is Bacillus thuringiensis isrealensis, more commonly called Bti. Bti is a select pathogen of mosquito larvae, and does not impact other vertebrate or invertebrate species except for blackflies and a few species of midge. Several different sub strains of Bacillus thuringiensis are available on the market for additional pest species.

The mosquito species targeted in these applications are Culiseta melanura and Coquillettidia perturbans. Larvae of these species have unique habits that make Bti less effective in their control. Cs. melanura larvae inhabit the protected areas under root systems in white cedar and red maple swamps called “crypts”. Crypts are domed structures the tree create to raise the root system and be less impacted by consistent high-water levels. These areas offer a protected habitat for these larvae to go through their larval development. Applications of granular or liquid based Bti either by hand or aircraft do not significantly penetrate the crypt habitat, so larval control is poor to non-existent.

Cq. perturbans larvae also have a unique biology; their larvae attach to the root systems of emergent vegetation such as cattails, breathing air through the root system of the plant. Since these larvae do not freely float looking for food like other mosquito species, the Bti bacteria are less available for consumption by the larvae. Most mosquito larvae rise to the surface of the water to breathe air, and descend to the bottom to filter-feed; Cq. perturbans larvae are stationary until they reach pupation and are ready to emerge.

The product to be employed for control of these 2 species is a biological product called Natular® (the active ingredient is a bacterium called spinosad, Saccharopolyspora spinosa). 2 certified organic formulations will be used, a short-term and a 30-day extended release formulation. The short-term product will be used in Cq. perturbans habitats and should expose these larvae to this bacterium within the effective control window which is 2-3 days. The 30-day formulation will be applied over wetland habitat for Cs. melanura larval control. The extended release period should allow for better penetration of this bacteria into the crypt habitats.

Rotary equipment (helicopter) will be used for these applications in areas greater than 5 acres, and follow up treatments by hand or backpack applications will be done in smaller habitats by CMMCP field staff.

Water sampling will occur in Cs. melanura habitat to determine if the product is reaching the crypts[3], and larval mosquito development and subsequent control will also be monitored in these areas. We will track adult mosquito emergence using surveillance traps and other methods in proximity to some of the treated areas to determine if emergence of these 2 species has been suppressed by these enhanced larval control efforts.

Target dates for application will be in late May and early June 2020 to coincide with weather and appropriate larval life stage. Pesticide labels and OMRI (organic) certifications are available from our office or on our website at https://www.cmmcp.org/pesticide-information/pages/spinosad-saccharopolyspora-spinosa.

[2] The National Pesticide Information Center, http://npic.orst.edu/ has information on Bti and spinosad

Following the application, water samples were collected for how 3-4 weeks from Cs. melanura crypts to measure the presence of spinosad, and Cq. perturbans adult emergence traps were placed in treated locations and an adjacent exclusion area as a control. 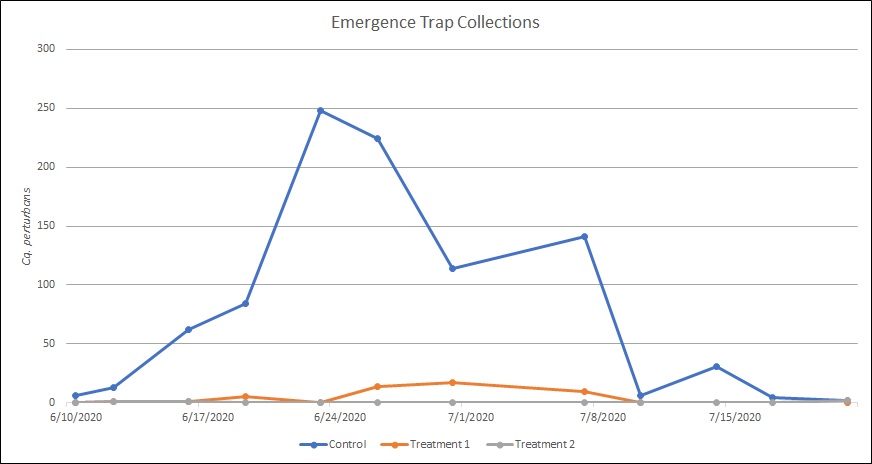 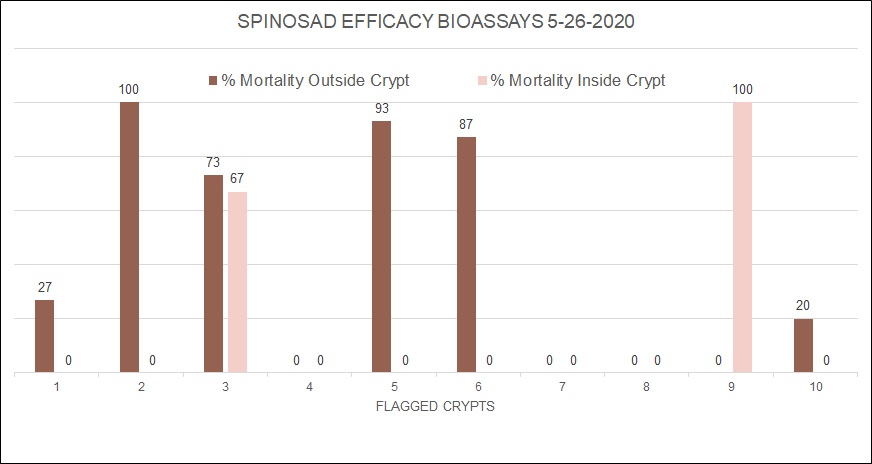